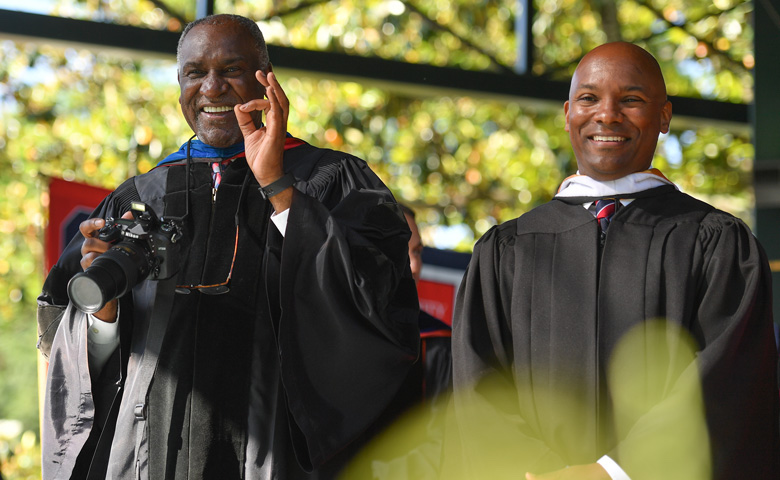 Donald Cole (left), pictured here with state Institutions of Higher Learning Trustee Shane Hooper at a UM Commencement, is being honored with a named scholarship for his devoted work as a faculty member, administrator, mentor and advocate. The Cole scholarship will assist African American Studies majors and encourage them to get involved in the university and pursue progressive change across Mississippi.

For 50 years, Donald Cole has made an impact at every stage of the University of Mississippi experience – as an undergraduate and graduate student, faculty member, administrator, mentor and advocate.

To honor his lifetime commitment, UM faculty, friends and alumni are working to establish the Don Cole Catalyst for Change Scholarship Endowment and have launched a fundraising campaign.

Ethel Young Scurlock, director of the African American Studies program and senior faculty fellow of the Luckyday Residential College, is the driving force behind the effort to fund scholarships in Cole’s honor. She said she’s amazed at the power of Cole’s 50-year legacy at Ole Miss.

“Every time he’s been here, he’s been a difference maker,” Young-Scurlock said. “He’s been able to organically create change and to build friendships throughout the state. That kind of leadership is rare, and we hope that will be a model for what our students will do in the 21st century.”

The Cole scholarship will support students majoring in African American Studies and encourage them to pursue a double major, get involved in the university and work toward progressive change across Mississippi, just as Cole did.

Cole arrived on the UM campus as a freshman in 1968, just six years after James Meredith integrated the university. Progress was still needed in the campus environment to help all students feel welcome. Cole, as he did throughout his life, jumped in to make a difference. As a result of his activism – which culminated in his arrest in 1970 for staging a protest during a campus concert – the university expelled Cole along with seven others.

After that experience, many people would have broken their ties with Ole Miss. But 15 years later, Cole returned to the university to earn a doctorate in mathematics. After working in the private sector and as a professor, he came back to UM again in 1993 as the assistant dean in the Graduate School and associate professor of mathematics.

During Chancellor Robert Khayat’s tenure, Cole served as assistant to the chancellor for multicultural affairs. When Cole retired in January 2019, he was assistant provost and an associate professor of mathematics.

Vice Chancellor Emerita Gloria Kellum worked closely with Cole in her 43 years at UM and said he advocated for all students, finding scholarship money and working to attract and retain diverse students and faculty members.

“He wanted to show the world that this university is serious about trying to provide everyone with opportunity,” Kellum said. “I watched him really open that door for a lot of people. He understood what it was like to not have justice as a civil right.”

Young-Scurlock said the Cole scholarship will help attract young people who seek an African American Studies background, understand socio-political engagement, and will go on to careers in business, politics, medicine, law, education, public and international policy, and beyond. Each recipient will take a course on the civil rights history of the university in which they will learn about the men and women who paved the way for them – including Cole.

“I think students get such a deeper commitment and understanding of what it means to be a part of the University of Mississippi when they understand what it took to make this institution what it is,” Young-Scurlock said. “Talking to students about Coolidge Ball, our first black athlete, talking to students about Cole, who made a difference by protesting and coming back and serving as an administrator, and even looking at the struggles of (Chancellor Emeritus) Robert Khayat, they understand that the University of Mississippi did not come out of nowhere, but it came out of struggle.

“Then our students understand that the struggles they have at 19 or 20 years old are important. Those experiences prepare them to be some of our top leaders in the nation. That’s our mission here.”

To support the Don Cole Catalyst for Change Scholarship Endowment, individuals and organizations can send a check to the University of Mississippi Foundation, with the fund noted in the memo line, to 406 University Ave., Oxford, MS 38655 or give online at Ignite Ole Miss.