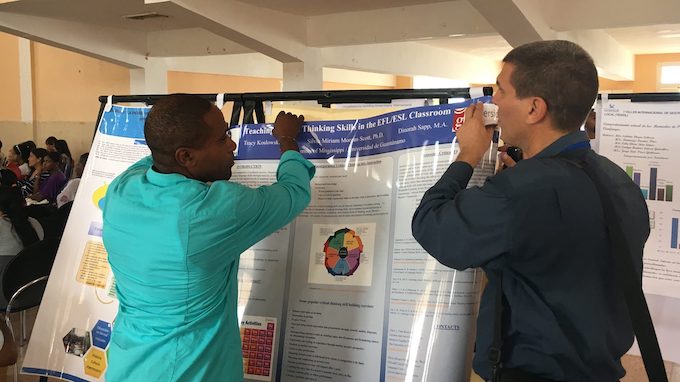 Cuba TIES IV Conference participants help set up one of the posters by UM faculty for presentation. Submitted photo

Six University of Mississippi faculty members were among educators from Cuba and many surrounding countries, including the United States, brought together for the recent Cuba TIES IV Conference.

“We have established a connection with colleagues at numerous universities in Cuba who are requesting we present and collaborate in further research,” said Koslowski, an instructor of intensive English who presented a poster on “Teaching Critical Thinking Skills in the EFL/ESL Classroom” with Silvia Miriam Morgan, a Cuban research partner from Universidad de Guantanamo. The poster was co-authored by fellow Ole Miss lecturer Dinorah Sapp.

“We have also established connection with the Ministry of Higher Education in Cuba in hopes of building future opportunities for Cuban colleagues and students in collaboration with UM faculty, students and programs,” Koslowski said.

“I have been invited back to Cuba in the spring to present at WEFLA at the University of Holguin,” Sapp said. “I also have four potential students from Cuba who would like to pursue graduate degrees in applied linguistics or teaching English as a second language.”

Krueger, a lecturer in writing and rhetoric, described his Cuba reception as “fantastic.”

“The people in Cuba were interested in my scholarship, asked great questions and have been proactive in reaching out to have me return and present at other venues,” said Krueger, who, with Campbell, presented a paper titled “Fostering Academic Development Through Social Language Experiences: An International Perspective” with their Cuban research partner Luis Mijares Nunez of Universidad de Pinar del Rio.

“The people I worked with in Cuba are serious about continuing relationships and working together.”

All Ole Miss presenters collaborated via email and social media with their partners for several months before the conference to prepare their work.

“Dinorah Sapp and I have been invited to present our poster at the TESOL International Convention in Atlanta in March,” Koslowski said. “I have been invited to design and conduct other workshops for students and faculty at the universities in Pinar del Rio and Cienfuegos this coming April.”

Koslowski met with Dayni Diaz Mederos, the director of international programs at Universidad de Cienfuegos, and with Santiago Rivera Perez, the director of language programs in the Cuban Ministry of Higher Education, to explore the potential for Cuban students to attend Ole Miss or even possibly faculty and student exchange programs with Cuban universities. Because open travel between the U.S. and Cuba is not yet possible, establishing a relationship with the Ministry of Higher Education is critical for potential partnerships in areas such as funding and granting visas.

“Major takeaways from the conference include that Cuban students are interested in American universities for their studies, and by having the largest faculty delegation from the U.S. at the event, UM representatives were able to widely promote UM to students and faculty alike,” Krueger said. “This promotion had a profound impact, as faculty at Cuban universities and representatives from the Cuban Ministry of Higher Education expressed their interest in further partnerships with UM due to the successful collaborations we have already enjoyed.”

Krueger said he also has noticed a difference in his classroom fluency.

“I have always been comfortable working with international students in my classroom, but attending the Cuba TIES IV Conference, where some information was presented in Spanish, really made me think about how much language matters in educational settings,” he said.