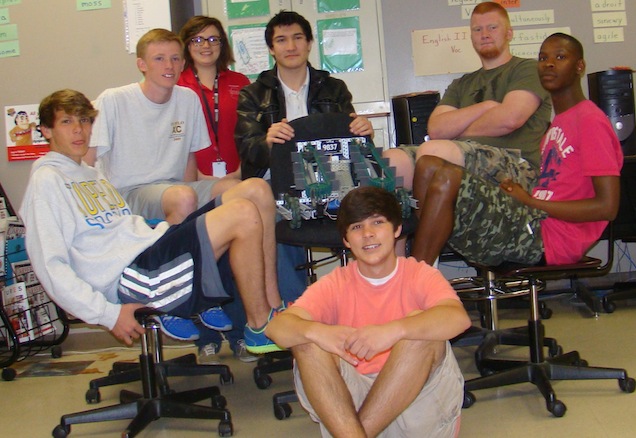 Though she didn’t know it at the time, before Amanda Gamble Wood graduated from the University of Mississippi in 2010, she was already being prepared to take the seat at the front of the classroom.

Wood, who earned a bachelor’s degree in physics and another bachelors’ in mathematics, set out with a career in the field of acoustics in mind. After meeting the man she would marry, she decided to change course and obtain her alternate route teacher’s license.

“My experiences at Ole Miss prepared me for my career in education, even before I knew I was going to have a career in education,” Wood said. “My physics professors were so helpful and truly passionate about their respective disciplines. I had always hoped that when I began my career, I would have that same passion, and I do.”

In just her second year of teaching robotics and engineering at Tupelo High School, Wood led a team of sophomores and juniors from her engineering class to the win the VEX Robotics State Competition in March.

That win catapulted the budding engineers all the way to the world competition, which was held recently in Anaheim, California. With no background in robotics, the students’ venture into the competition was a first for everyone involved.

“This was our first year to compete in any robotics competition. My students did not have a background in robotics, so we were elated to become state champions and then advance to the World Championship,” Wood said.

The competition was based on a game called “Toss Up,” which required students to build their robots and earn points by moving a variety of different size objects across a court. At both the state and world level, teams had to form alliances with other schools and work together to score the most points.

The World Championships featured 400 teams from across the United States and from China, Japan, New Zealand and France, among other countries. The teams were divided into four divisions of 100 teams, and the Tupelo team finished 80th in their division.

“It was exciting to see students from across the world engaged in robotics and STEM fields,” Wood said. “Most every student I spoke to was planning on entering a STEM-related field upon graduation from college.”

In addition to a lack of robotics experience, Wood’s team also got a late start building their robot. Where most teams spent the past year fine-tuning their machines, the Tupelo students began building their robot in January. Still, the alleged underdogs persevered.

“Through this journey, we learned a lot about each other and teamwork,” Wood said. “There were many ‘heated debates’ about how they should design and program their robot. I believe they also have a deeper understanding of accountability. Each student had their own specific role in the team and each one worked hard to accomplish their goals.

“I hope my students learned that hard work and dedication pay off. I hope this competition taught them that they can do what does not seem possible.”

Though it was not the path she first envisioned as a physics and mathematics major, Wood said her journey as a teacher has been full of rewarding moments.

“The experience of taking students to a world competition was very educational and a lot of fun,” she said. “From a teacher’s standpoint, to see how my students’ hard work (time spent after school and weekends) paid off and then to see them work with other teams from around the world was really amazing.”